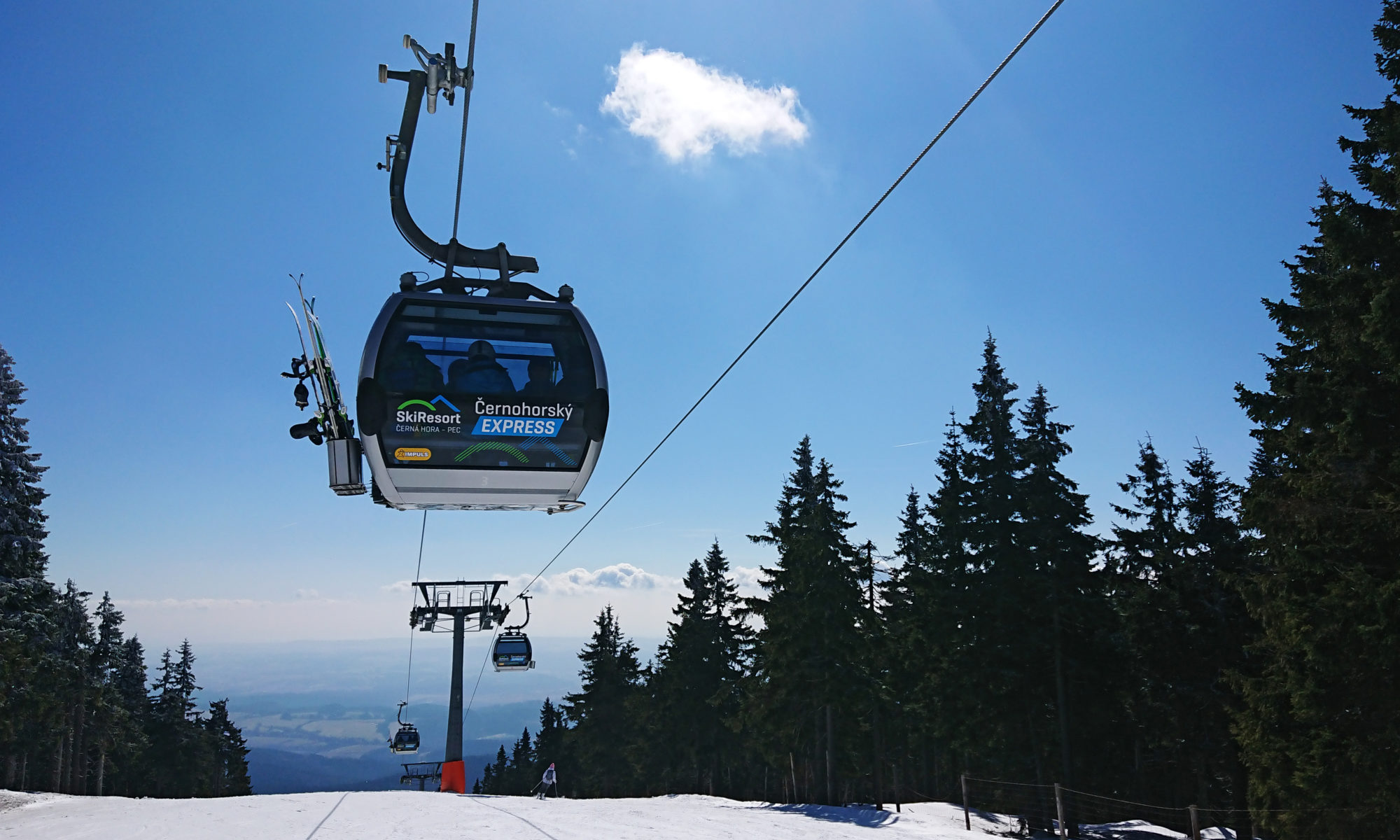 This year is special. It is believed, that the best approach to life is to live “here and now” and not to worry about the past or hypothetical future events. The uniqueness of this year lies in the fact that “here and now” is quite … shitty, and all in all, it is probably nicer to remember and imagine where you could ski, if not coronavirus….

In April most ski resorts start to shut down, but there are some places where the conditions are still fantastic. And you don’t have to go to the Alps – Czech Krkonose Mountains will serve you well!

And so, for example, you could go to Harrachov. First of all, the resort itself is very nice – relatively inexpensive and with slopes of all levels of difficulty. As you could see on the webcams, the conditions in April 2020 were still very good there and the skiing would be great! Generally, Harrachov is known for quite a long season. In April 2017 skiing was great too:

When skiing, you can have a look at the Čerťák ski jump hills complex, including the giant “mammoth” hill for ski flying. Most of the complex is currently closed and rots picturesquely, although recently, thanks to the Polish-Czech initiative, it was possible to reactivate two smaller hills. You can walk around the landing slope and “hill size” point of the “mammoth” hill and imagine, what it is like to land there at a speed of 100km / h after a 200-meter flight.

Additionally, when skiing in Harrachov, you can visit the Jára Cimrman Museum located nearby. Do you know who Jára Cimrman was? Well, this is the most famous person in the history of the Czech Republic, who lived at the turn of the 19th and 20th century. In 2005 he even won a Czech television contest for the top 10 Czechs, but the results were unfortunately cancelled.

Cimrman was an inventor, writer, composer, dentist, philosopher, globetrotter, architect, criminologist, criminal, athlete, pedagogue and self-taught gynecologist. He had a great impact on the history of Czechoslovakia and significantly influenced the creators and researchers of his era – including Chekhov, Eiffel or Marconi. He submitted over 230 inventions to the patent office; unfortunately, all of them were immediately rejected except for two, which were rejected after some time.

There are many traces of Cimrman in the Czech Republic (although no image has survived). In Prague, there is the Jára Cimrman theater, which exhibits his plays, and in Brno, on the wall of the tenement house at 26 Anenská Street, you can find a commemorative plaque saying that Jára Cimrman never lived and did not work in this house.

And just there – near Harrachov – a small Jára Cimrman museum is located. You can get to know this character better and see some of his inventions with our own eyes.

This is a very important figure for Czech history and for the Czechs themselves, who are not bothered by the fact that Jára Cimrman never existed (which is why the results of the TV plebiscite were annulled).

The second place where my longing thoughts go to are the Janske Lazne.

I like Janske for long slopes and good infrastructure. A fast six-seater serves the newest slope, Hoffmanky, and gondola takes us to the summit – which is rare in the Czech Republic. A small downside is the lack of long, blue – these can be found in Harrachov, Špindlerův Mlýn or Rokytnice nad Jizerou.

With the skipass you can use the connection between the summit of Černa Hora and Pec pod Snezkou resort (partly by skiing yourself and partly by a caterpillar bus). After skiing in Pec you can return to Jańskie by a ski bus, although this option is not available in spring.

In April, however, you can still find very pleasant conditions, such as shown in the clip from 2018:

Of course, there are some interesting facts about Janske.
First of all, there is a nice toboggan run  – you can take the gondola to the top and ride the toboggan down the 3.5-kilometer route. However, it is also an option for full winter rather than for April.

Secondly, the peak of Černa Hora mountain is quite flat and spacious and you can walk around it on foot or take a short cross-country trip. An interesting structure can be found at the summit – a TV tower. It has a very elegant design, for a technical object. Interestingly, the tower in the 70s was built and equipped by Polish companies: Budimex and Unitra.

It is also worth mentioning that in Janske Lazne in 1925 the first world skiing championships were held. Only 4 events were played (Czechoslovakia won 10 out of 12 medals), including ski jumping. The competition took place on the now non-existent hill, located in the city, near the Evangelical church. A Willy Dick, representing Czechoslovakia, won it. By the way, could there be a more unfortunate name than WILLY DICK? As it turned out, he was a “dick” not only by name – a year later, at the next world championships in Lahti, Willy represented Germany. Not cool, Willy… To maintain balance, the gold medal in the Norwegian combination was won by another Czech, Otokar Nemecky (“Nemecky” means “German” in Czech), who, despite his name, never changed his nationality.

Another place in the Czech Republic that I would like to visit in the first decade of April is Špindlerův Mlyn.

Here I have to apologize in advance for the poor quality of the photos, because although I usually take photos like crazy, in Špindleruv I took hardly any and what I show, are stills from clips recorded at the end of March in 2018. Webcams showed, however, that you the conditions in April 2020 were really good.

The slopes in SM are great – long and wide. A small downside is that they are scattered around the city and connected by bus, not a lift. In case of a 1-day trip, I don’t want to spend time sitting on the bus. At present, it is being considered to build a car park and a terminal at the town entrance to connect the Svatý Petr and Medvědín complexes with the lifts. However, it seems that the Stoh and Labská slopes, lying a bit aside, will remain “singles” for a long time.

Špindlerův Mlyn is ideal for spring skiing, but I do not like going there in winter, because the longest and most interesting slopes in the Svatý Petr complex have northern exposure and until February they stay in the shadow. On cloudy days, when it is snowing, it does not matter, but in frosty and cloudless periods it gets quite gloomy – there is no sun and the snow gets hard and icy. Of course, if someone likes fast, sporty skiing, then they have a great time. On such cold days, many skiers move to sunny Medvědín slopes, but then you mostly enjoy the sun waiting in the line…

If you like snow groomers (like me), you can take a ride in one of them. “Zážitková jízda rolbou” allows, for a certain fee, to ride as a passenger during the afternoon preparation of slopes, approximately between 16.00 and 18.00. This is a great option for ladies who can buy a wonderful gift for their husbands, and have peace of mind after a busy day on the slopes;)

You should respect Špindlerův Mlyn for one more reason – they have been regularly organizing the Alpine Ski World Cup competition for years (last one in 2019).

It is worth mentioning that the resorts in Krkonose Mountains are not the ones that close last : Praded, located in Jeseniky Mountains, is traditionally open until the end of April. I wrote about it here :).

This year Praded proved that it is not afraid not only of spring, but also of coronavirus and remained open for most of April as the only resort in the European Union 🙂